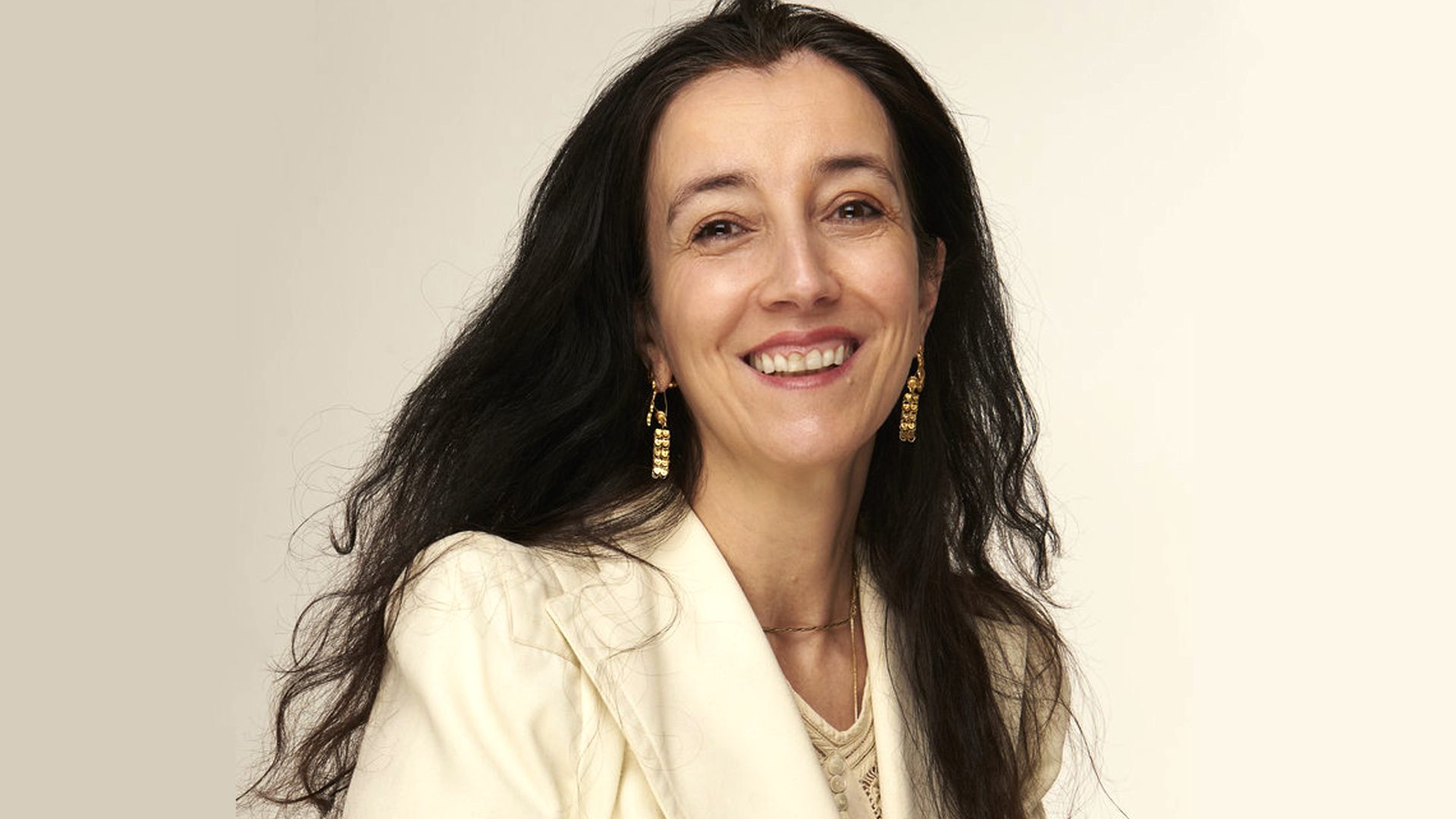 Tamara Cincik is the founder of Fashion Roundtable, a think tank with a mission to build a bridge between the fashion industry and government.

Since it was founded in 2017, Fashion Roundtable has gathered evidence and produced policy papers on a number of topics ranging from inclusion and diversity, the impacts of Brexit, union representation for fashion stylists and assistants to environmental and social sustainability.

In its role as the secretariat for the All-Party-Parliamentary-Groups (or APPGs) for Fashion and Textiles as well as Ethics and Sustainability, FR highlights industry-specific topics to participating Parliamentarians, encouraging open discussion on policy changes.

In this conversation, Tamara reflects on how she went from a career in styling to working in Parliament, why the fashion industry needs to understand the impact of policy on and on what pillars she built Fashion Roundtable.

To start us off, could you explain why you describe Fashion Roundtable as a think tank?

I think the reason that we came to the word “think tank” was because, while there's lots of different ways you can angle this - such as public affairs, communication or advocacy - the reality is all those things sit under one umbrella, which is a think tank. We are also nonpartisan and apolitical and we've consciously done that. My experience of working in Parliament was that cross-party work, where you're working with people whose political persuasion and policy might be very different from your own is far more likely to achieve change - if you can find common ground. It's about collaboration.

You talk about your work in Parliament, but before that you also worked as a fashion stylist?

I still got one client that I work with, who I've had for over a decade. She is a celebrity in this country, Sophie Ellis Baxter. But I've worked in the industry for over 20 years.

So how did you get into politics? Can you backtrack how your career developed?

It was actually when I was styling another celebrity on the day that Labour lost the election in 2008. I was aware that things were starting to shift. And I joined the Labour Party. And then I went to some events and then after the Tory majority government won with David Cameron, I was approached by somebody who said, “why don't you join a mentoring scheme?” because there was a real sense of, we knew this meant an EU referendum. There was an austerity government, suddenly food banks had become normalised and all these things that had never been part of the England that I'd grown up in. And I went into this mentoring scheme and it was the first time I'd ever gone to the Houses of Parliament and I found it very bizarre. And then my mentor on the scheme, who's a parliamentarian, offered me a role in her office. So, I took it, four days a week, still styling on the side. That's when I realised that there was a need for the fashion industry to be more engaged and that's how I launched Fashion Roundtable.

How would you say Fashion Roundtable complements the work of the British Fashion Council?

When I started Fashion Roundtable, it was very clear that there are going to be three core pillars. One was education, one sustainability and one was representation and inclusion. And those three threads have been consistent themes for us, throughout all our events before lockdown and throughout all of our policy agendas.

So, with the BFC we have started advising them on policy. We're looking to host an event with business leaders around the outcomes of our representation and inclusion report in December, to support the diversity steering group that the BFC’s got. So, I think what's shifted in the last six months is much more engagement with the BFC than before, helping them to turn policies into action. 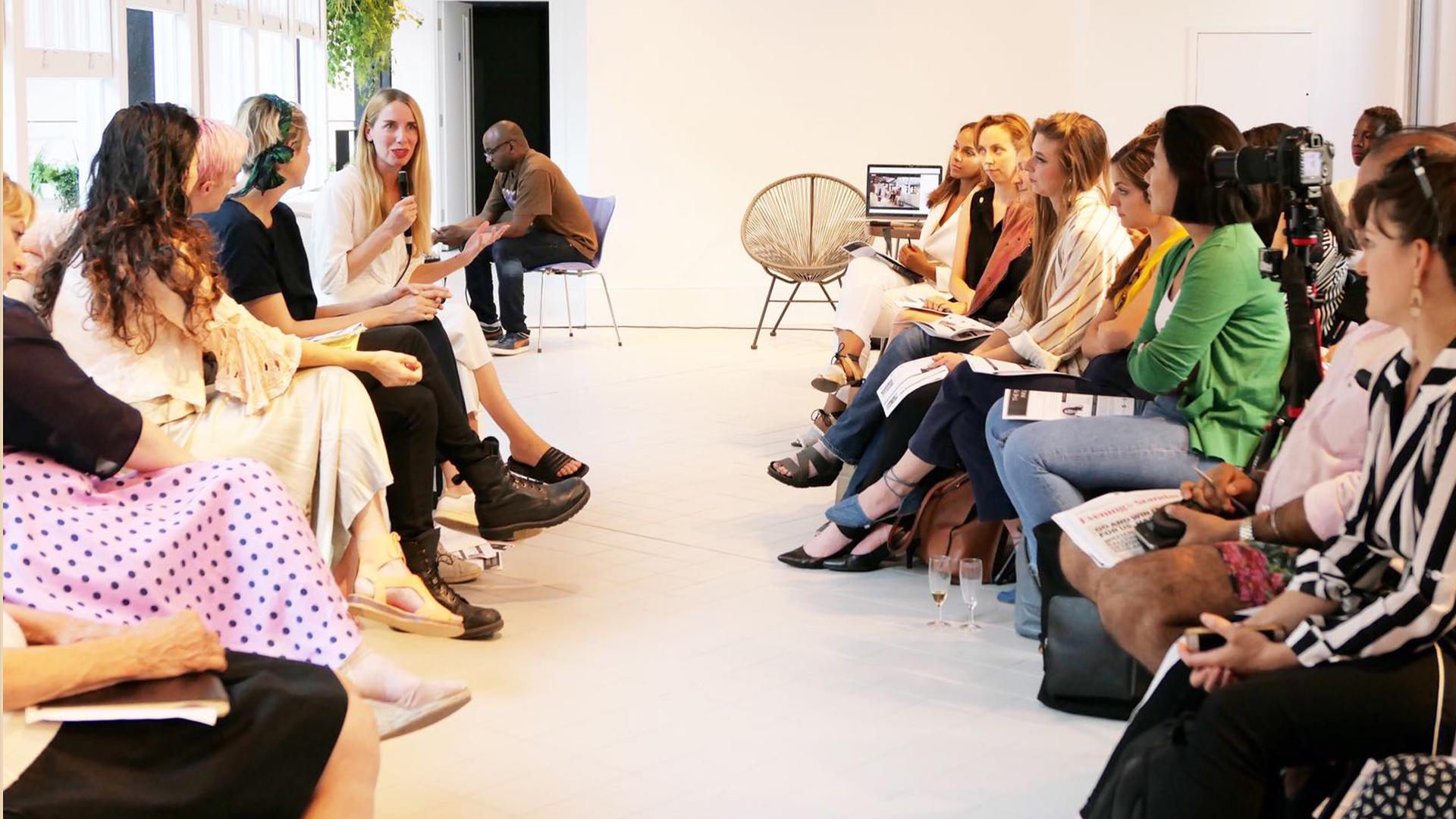 You touched on the diversity and inclusion paper, that's one of the biggest advocacy policy papers that you've done to date. Can you just explain to our readers, how did this policy paper come about and what outcomes have there been?

We have two All-Party-Parliamentary-Groups and the first one that we took on was the Textiles and Fashion APPG. In the meetings we had it became very clear that voices from across all aspects of the sector - be that education, creative, manufacturing, design or marketing - were very, very alert to the fact that there were structural issues which were holding people from diverse or marginalised groups back, and that the pathways into leadership roles weren’t there. Or if they were, they were for a kind of hero, who then had the role of representing their community, which is a lot of responsibility.

From that we then developed a team to lead on the research and we held evidence sessions and we had quantitative and qualitative data coming in through surveys and that was the backbone of the report. Then we added in an economist to look at the economic impacts that a lack of diversity and inclusion have, which is well documented. But I wanted to add that to the paper because I felt it added another layer of why it's important to make your business more inclusive. It’s not only because it's the right thing morally to do, it's a business decision.

That brings us nicely onto the APPGs. But before we get into how Fashion Roundtable is involved in them can you just explain what an APPG is?

They are cross-party groups of different parliamentarians, usually Members of Parliament (MPs) and Peers (members of the House of Lords) from all different backgrounds and they will have an interest in a certain subject.

And in a typical APPG meeting, what is it that you discuss, what are the kind of topics?

It would depend, but we’d discuss for example business in China or the Commonwealth, innovation, sustainability or for the report that we did called Cleaning Up Fashion for the Ethics and Sustainability in Fashion APPG. For the report there was lots of evidence looking at waste and innovation as well, but also looking at exploitation issues, not only in the UK but across the supply chain.

What can retailers learn if they were to go to your website and look at the APPG minutes that were taken? What insights can they take away from those meetings?

I think that they could get informed about different areas of policy engagement. Every single decision that we make in our lives is actually informed by government policy in the country that we live in. Whether that's the caffeine level of the coffee that you drink, or the ages that you go to school, or the cost of living, the interest rates on your bank account or your mortgage. So, it's not that this is something that only them over there need to think about. Everyone needs to think about it. 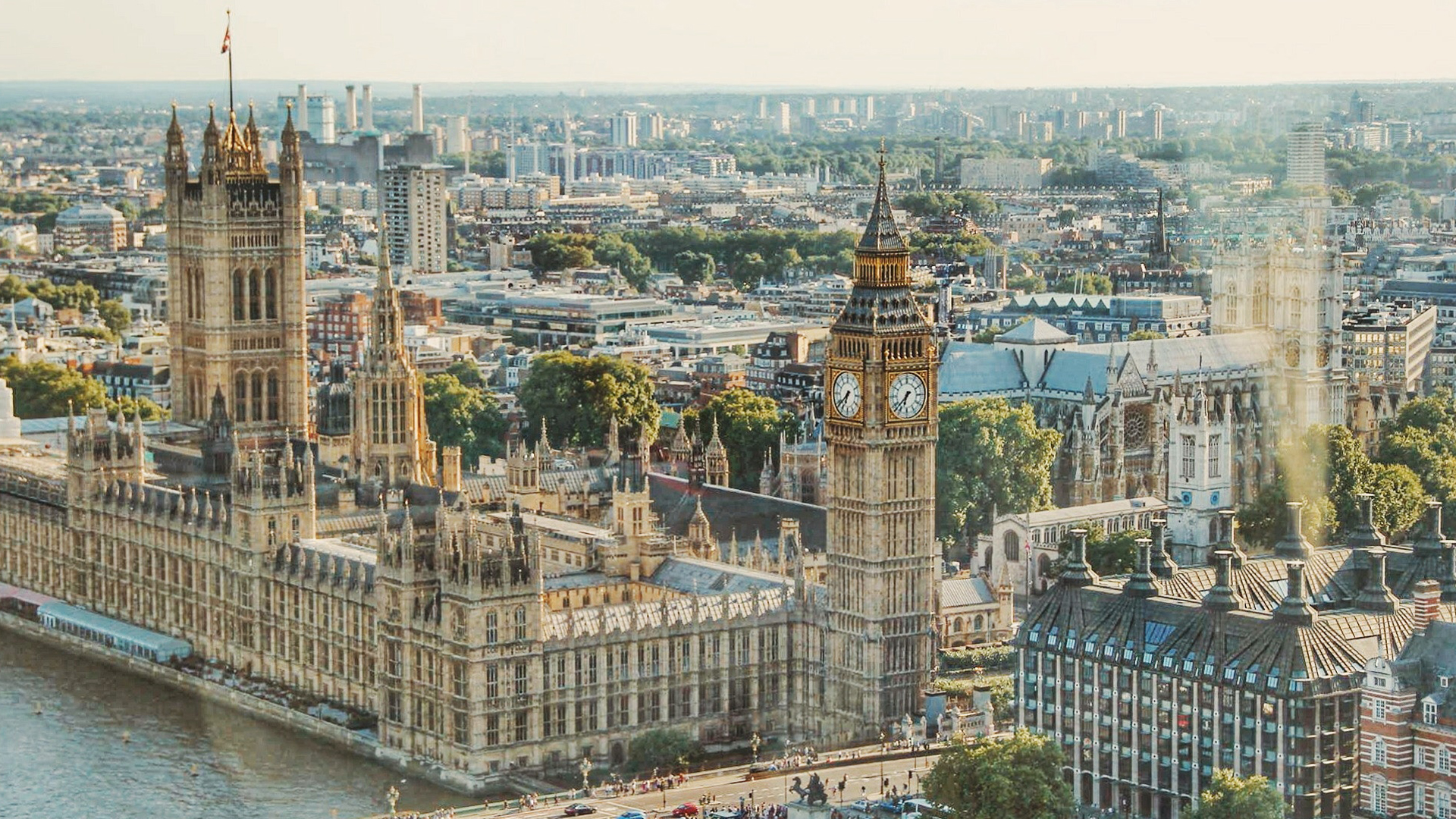 And would you say that before you kind of came and introduced fashion to the world of government, was there a lot of interest or knowledge about how policy impacted fashion?

There was hardly any knowledge. What I found really interesting when I worked in Parliament was that when I was speaking to parliamentarians about the issues facing fashion creatives and freedom of movement, for instance, they got it when I explained that these people had unique talents, because they've been lobbied by the opera industry. Opera makes about £2 million for the UK economy, we make £35 billion as a fashion industry as a whole. So, there's a lot more money in fashion than there is an opera, but they had been lobbied by the music industry, and even by Opera, which I would argue is quite a niche sector. And I think that gave me the awareness that my sector hadn't engaged as much and that there was a missed opportunity and equally that we needed to address that.

I want to now turn to your more recent work lobbying the government to source personal protective equipment (PPE) locally for the NHS. You've been quite successful with that, now 70% is sourced from the UK I understand?

Not anymore. It was but there are no new orders at the moment. I've checked, because I spoke to the government about this a couple of weeks ago. But they did achieve that target over a three-month period last year.

Okay. So, in that case I would ask you to talk about a bit more about the PPE procurement crisis, which was a huge issue last year. And for some reason the government was reluctant to get the UK fashion industry involved in PPE production. How did you approach this issue?

What happened was that I and other people were being approached by the NHS and NHS Trusts desperate to get scrubs and PPE. And meanwhile, there were manufacturers who spent thousands of pounds getting the right equipment and there was a complete disconnect. I think that disconnect is still there.

And I found it very challenging, if I'm honest, dealing with the revolving door of consultants that the government brought in, who weren't experts in supply chain issues, or if they were, they weren't fashion and manufacturing of clothes and textiles. One of them was food. I think government could have done more. I was obviously as concerned as everybody else about some of the some of the contracts that were delivered and that weren't given to people who we knew to be experts who made here. Who'd gone out and bought all the right equipment and gone through the correct channels to bid and were ignored.

I think that was really challenging to watch and I did argue that quite vehemently on the calls that we had. I mean, it could be a vast contract for the UK fashion industry. Obviously, it's not making design or fashion. But it's really important. And there's no reason why, now that the UK is out of the EU, that they couldn't subscribe to an agenda where they bought all of their uniforms, or as much as possible from the UK. And that would ensure a number of jobs.

Do you think the UK fashion industry can still thrive?

Yes. If we got our messaging right around sustainability and B-Corporations, and the need to support on-shoring and the skills shortages. If we get all of those things lined up, we'd be good to go because we've got the talent here. 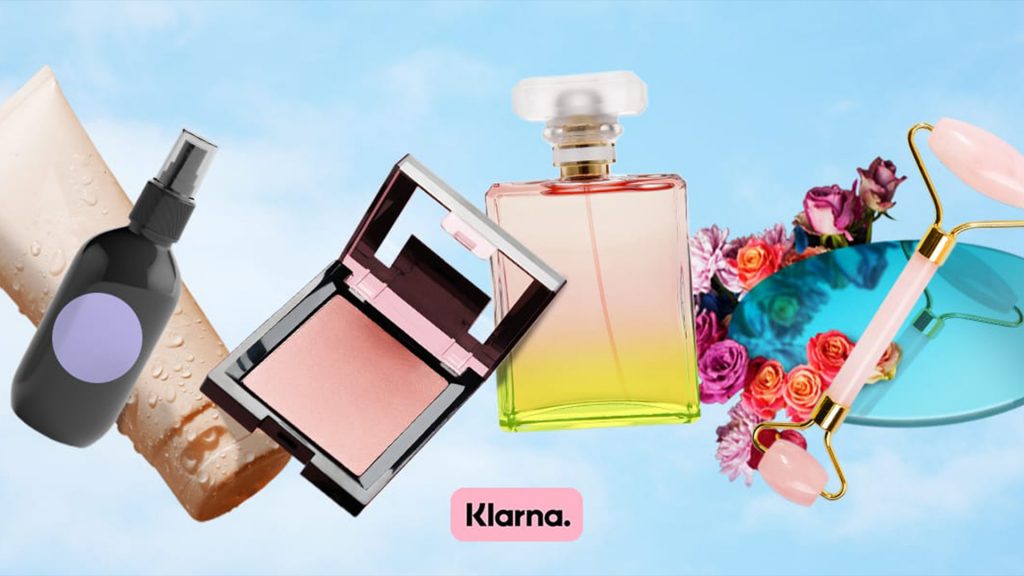 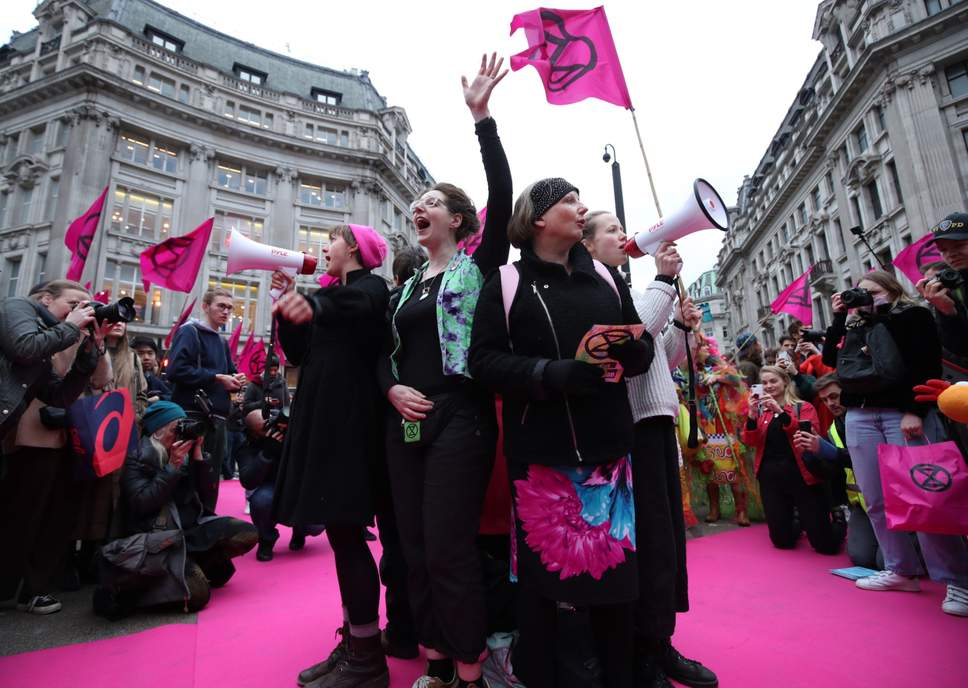 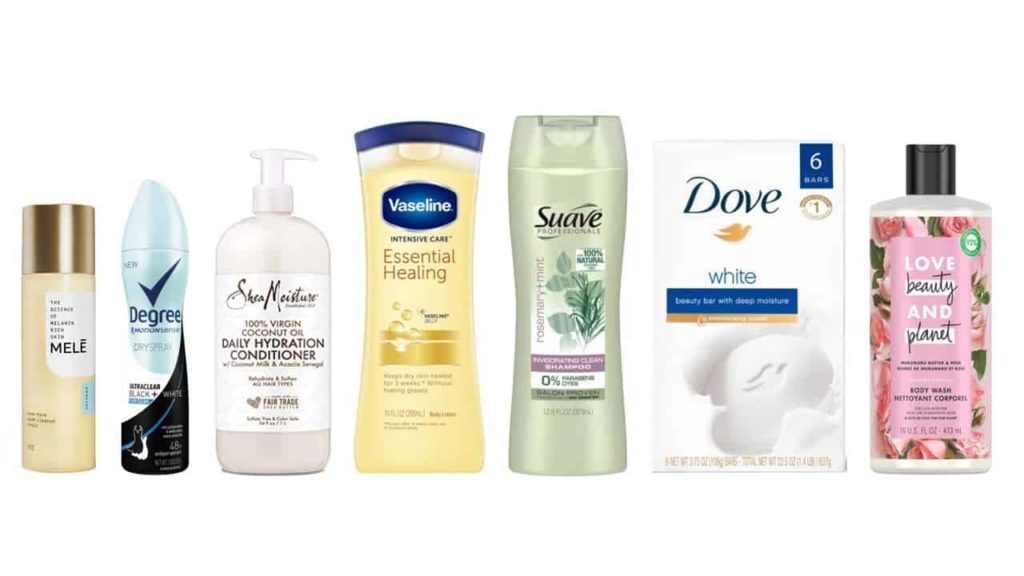